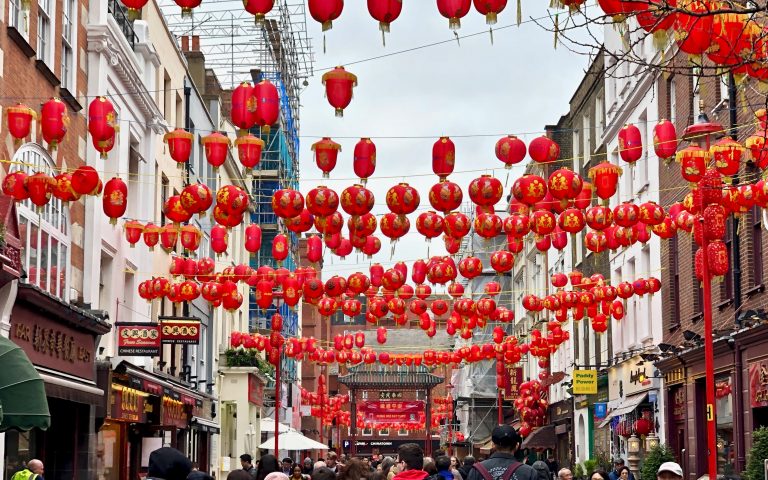 Are you ready to bid farewell to the Year of the Pig and bring in the Year of the Rat? Chinese New Year—also referred to as the ‘Spring Festival’ or ‘Lunar New Year’—will officially begin on 25th January 2020 and London is full of ways to celebrate! Watch colourful floats bring London’s West End to life, try some mouth-watering food at the best Chinese restaurants in town or watch a Chinese blockbuster on the big screen. However you want to celebrate the turn of the Lunar Calendar, our guide to Chinese New Year in the capital has you covered.

There are few better cures for the January blues than the sight of vibrant floats taking to the streets of the West End for London’s famous Chinese New Year parade from Charing Cross to Chinatown. Attracting thousands of tourists and Londoners every year, the parade is made up of more than 30 groups of participants and features the largest gathering of Chinese lions and dragons in Europe.

Chinatown should be at the top of your list if you’re looking for spirited Chinese New Year celebrations. Watch a traditional lion dance, try your hand at some arts and crafts and even have your photo taken with Chinese zodiac animals. If you start to feel peckish, why not stop for a traditional meal in one of Chinatown’s restaurants?

Celebrations in Trafalgar Square commence at midday with screen shows, firecrackers and the Lions’ Eye Dotting Ceremony. Grab some street food and settle in for a day of traditional dances, martial arts displays and live music performances. For festivities that are fun for all the family, drop by the National Gallery where you can take part in Chinese-themed storytelling sessions and arts and crafts workshops.

Experience the best Chinese language cinema has to offer with the BFI’s programme of special screenings to mark the start of the Year of the Rat. Follow one family’s New Year celebrations in Four Springs, an intimate documentary that became an unexpected hit in China, or have your heart-strings tugged on by Little Q, the tale of an ill-tempered celebrity chef’s sight loss and the bond he builds with his new guide dog.

Yauatcha branches in Soho and The City will be serving celebratory Cantonese dishes as part of a special Chinese New Year menu. Inspired by the legend of The Great Race—the tale of the Jade Emperor’s race to decide the order of the zodiac animals—the menu features delicious dishes, from crispy rice silver cod with pickled golden beets, to the Yauatcha signature duck salad with pomelo, pomegranate and shallot. Save room for the delectable Jade Emperor dessert, a large macaron made with yuzu curd, mandarin marmalade and candied ginger, and don’t forget to order a lucky Jìng Sù Peony cocktail before you go.

For an extra treat visit Yauatcha Soho on Sunday 19th January or Yauatcha City on Wednesday 22nd January when you can watch a lion dance said to bring good luck in the Year of the Rat.

Hakkasan’s special menu is encouraging guests around the world to celebrate good fortune and modern Chinese cuisine as we enter the Lunar New Year. Visit their Michelin-starred restaurants in Mayfair or Fitzrovia where you’ll be invited to dig into abalone and wild mushroom ‘golden treasure pockets’, baked salt-crusted chicken and other special dishes showcasing high-quality ingredients. End your evening meal on a sweet note with the Lucky Jie dessert which features salted caramel ganache, mandarin, chilli and cocoa.

Situated on level 33 of The Shard, Hutong will be bringing in the new year with a sharing menu that encapsulates the diversity of Northern Chinese cuisine. Enjoy four exceptional courses of sharing dishes—accompanied by a traditional lion dance to ward off evil spirits—as you look out at stunning views of the capital city.